The $16MM renovation of the Jacksonville, Texas historic Tomato Bowl Stadium required the construction of 9 new arches. The arches are 9-1/2 feet tall x 15 feet wide and 26 inches thick. The expanded polystyrene forms used to create the arches were designed in 5 vertical pieces with the center piece being "sacrificial" after each pour and the other four sections being reusable for additional arches. There were 9 pieces of the center section provided with the understanding that it would be the first piece removed and would most likely be damaged during the removal process. The contractor used their standard flat forms on both the front and back of the newly formed arched walls.

The forms were made of EPS39 Geofoam with a compression strength of 15 pounds per square inch at 1% deformation. With the weight of the wet concrete applying a force of 12 psi at the bottom of the form, the EPS 39 worked out perfectly. With a weight of 2.4 pounds per cubic foot, the largest sections of the forms weigh just over 160 pounds, making them easy to handle and set in place. To prevent any damage during shipping, the forms were "shipped in their shell", meaning the balance of the rectangular block they were cut from remained intact until the forms were unpacked by the contractor.

EPS is an economical form liner for creating shapes and contours that would be extremely expensive out of wood or steel. Universal Foam Products’ patented attaching system makes it very easy to secure our form liners to a contractors straight forms. They are used in highway and tunnel construction as well as a variety of other projects. 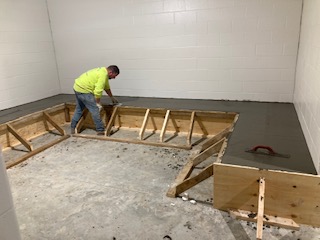 “Universal Foam Products was our Geofoam supplier for a stadium seating project in New Orleans. The material was delivered on time and cut to size. We installed the project in less than 3 hours with a 4 man crew without cutting a single piece of foam. We look forward to doing more projects with your company in the future.”